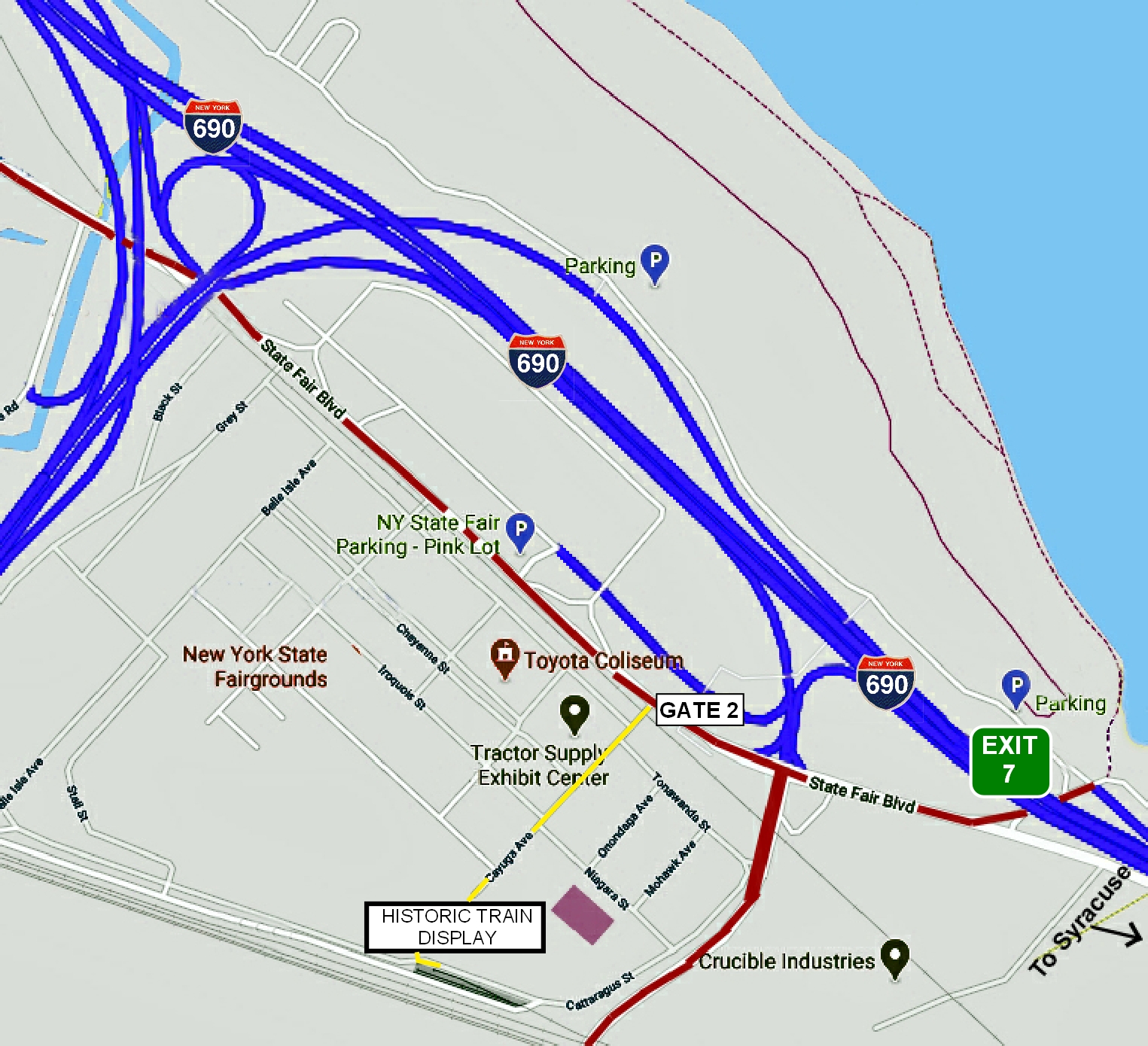 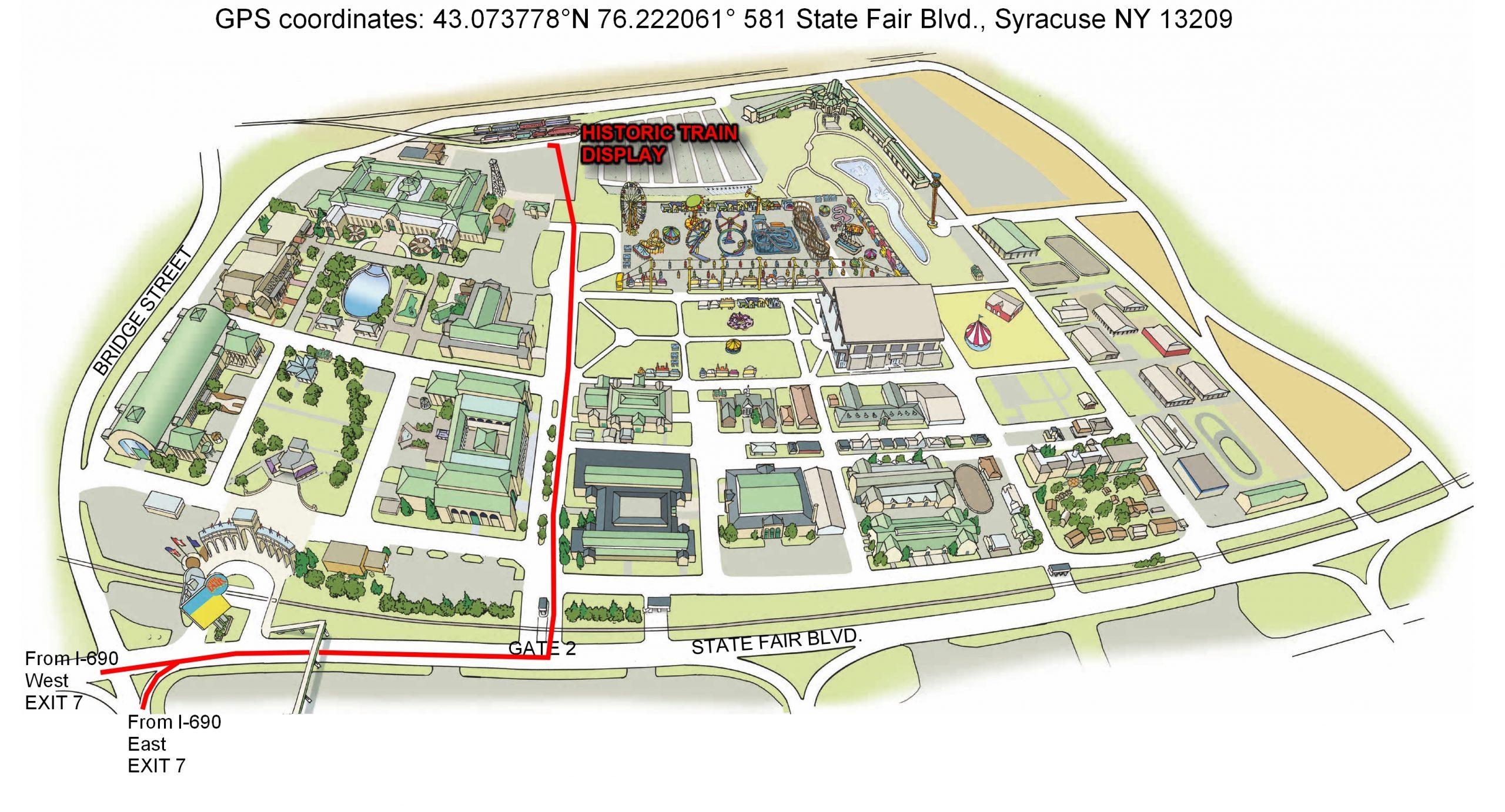 Some historical notes of interest:
The D&H coach was named for the railroad’s senior conductor when the car served on The Adirondack during the 1970s before Amtrak took over operation of the train. Built in 1916, the car was the oldest coach in regular D&H service when it was donated to the CNY Chapter in 1968. The D&H ended up leasing it back for use on The Adirondack in 1975 due to equipment shortages.

The B&O combine was once part of that railroad’s National Limited. The rest of that train is on display at the B&O Museum in Baltimore, MD.

The cabooses on display represent the wide disparity of equipment used by the New York Central. The wooden #19144 was a design the railroad adopted in the late 1800s and continued building into the 1920s. These 19000-series cabooses were used on local freights almost to the end of the NYC in 1968. This caboose had been purchased to become a hot dog stand, and later a clothing store in DeWitt. Chapter member Bob Newman bought it and restored the caboose before donating it to the CNY NRHS. The Chapter further restored the caboose with composite materials in 2019 to repair extensive weather damage.

The bay window caboose was a unique New York Central design and served the NYC, Penn Central, and Conrail before being acquired by Speno Rail Services as a rail grinding “support car,” as evidenced by the modification of one end. The CNY Chapter NRHS acquired it in 1988.

The Long Island multiple unit (MU) coach once ran with other coaches on electrified tracks into New York City. This one was built in 1930 and retired in 1971. It was acquired by the Chapter in 1975.

Denver & Rio Grande Western Business Car #102 started life as a coach. It and a sister car were rebuilt at the railroad’s Burnham Shops in Denver in 1929. Air conditioned in 1941, the 102 was used principally by the Transportation and Engineering departments. It was further modernized in the 1950s with addition of sealed windows. It was retired in 1964. The 102 ended up on display in Minnesota for many years, and after a succession of owners was acquired by the CNY NRHS from the Iowa Pacific railroad holding company in 2013.

The sales car was originally a Pennsylvania Railroad “P70” coach. The P70 was the first of the Pennsy’s 80-foot all-steel coaches. More than 1,000 of the cars were built between 1907 and 1929. Following World War II, they were all rebuilt retaining the original clerestory roofs. The toilet rooms were relocated to one end of each car, and electrical and AC control cabinets were placed at the other end. The car’s unique ‘porthole’ toilet room windows were then at the same end of the car. Many of these cars were placed in commuter service late in their lives by the PRR and successor Penn Central.

This car was acquired from Conrail by the New York State “Operation Lifesaver” program and converted to a display car. It was acquired by the CNY NRHS in 2016 and is used for sales of merchandise to benefit the Chapter’s various programs.