Open Sundays, Noon-3pm.
The museum follows all state required mandates regarding COVID restrictions. Masks are required for any unvaccinated guests. 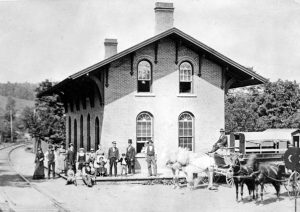 Place cursor on photos below to view descriptions.

Martisco Museum is a restored former New York Central Railroad station listed on the National Register of Historic Places. It is a two story Victorian brick structure constructed in 1870. The first floor is reminiscent of a small town railroad station. The second floor contains many railroad exhibits. The station is located on the Finger Lakes Railway, formerly the Auburn branch of the New York Central.

For more than 150 years, the cities of Syracuse and Auburn have been linked by a railroad line. Chartered in 1834 as the Auburn and Syracuse Railroad, the line was part of the original rail route between Albany and Buffalo. The construction of the direct line connecting Syracuse and Rochester, completed in 1853, and the formation of the New York Central Railroad shortly thereafter, meant a shift from primary to secondary status for the "Auburn Road". The branch line continued to be an important rail link throughout the 19th and 20th centuries and is still active today.

The Auburn and Syracuse bypassed the Village of Marcellus, but provided a station some two miles north. The present brick structure was erected in 1870 to replace a wooden building. In 1897, the Marcellus Electric Railroad was chartered to provide a direct rail line between the village and the station. However, no electric train ever operated on the line.

Passenger service on the branch reached its zenith in the early 1900s. A great variety of New York Central passenger equipment, including diners, parlor cars and sleepers, was regularly assigned to the branch line trains, and excursionists and vacationers managed to fill every available seat. After World War II, the popularity of the private automobile caused the reduction and finally discontinuance of rail passenger service on the line. The final "Auburn Road" passenger train left Syracuse on the morning of May 18, 1958. It consisted of a single diesel locomotive, baggage car, coach and sleeper.

The Marcellus and Otisco Lake ceased operation in 1959 and was abandoned the following year. The Martisco freight house, suffering from old age, collapsed in 1970. The New York Central Railroad merged with the Pennsylvania Railroad in 1968 to form the Penn Central Railroad, which was taken over in 1976 by Conrail after bankruptcy. Rail service declined over these years. In 1995, the Finger Lakes Railway purchased the line from Conrail and freight operations increased to five days a week.

In 1964, the Central New York Chapter of the National Railway Historical Society learned that the Martisco Station was scheduled for demolition. Early in 1965, a lease was obtained from the New York Central and the station was purchased the following year.

Martisco was four walls and a leaking roof when Chapter members started the renovation. Fixtures and furniture were obtained from other abandoned stations; fresh paint restored visual respectability; electric and water lines were reconnected; and a new roof corrected leaks caused by years of neglect. It is the Chapter's goal to make this one of the finest station museums in the country. Martisco Station is today's museum of railroading's past. Sit on the old wooden bench, prop your feet up next to the pot-bellied stove, hear the agent as he taps his telegraph key, relax and listen for the sound of a train coming up the valley.

In 1949, the wing that housed part of the station agent's living quarters and a storage area was torn down since it was no longer needed. But under Chapter ownership, such space is always valuable. So, when it came time to find a location for the Chapter's library in 2010, it was decided to replicate the former station wing. The library was dedicated on Aug. 13, 2011. It is available to use by appointment for researchers and Chapter members.

Because of its historic architecture and significance, Martisco Station was placed on the National Register of Historic Places in 2007. 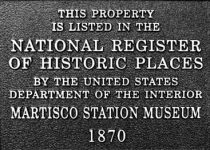